In 2022, construction is expected to begin on the first light rail line in the Valley since the demise of the Red Cars in the 1950s. The East San Fernando Valley Corridor project promises to transform life for hundreds of thousands of Valley residents, linking the Van Nuys Metro station to the Sylmar/San Fernando Metrolink station and providing swift efficient service to some of the busiest commercial and residential areas of the Valley.

This Van Nuys to Sylmar line is in the first tier of priority for funding by Measure M, the voter-approved initiative to support the expansion of mass transit throughout Los Angeles County. The Federal Transportation Authority is now giving fast-track review consideration to federal funding for the project as well, through the bipartisan Infrastructure Investment and Jobs Act of 2021. 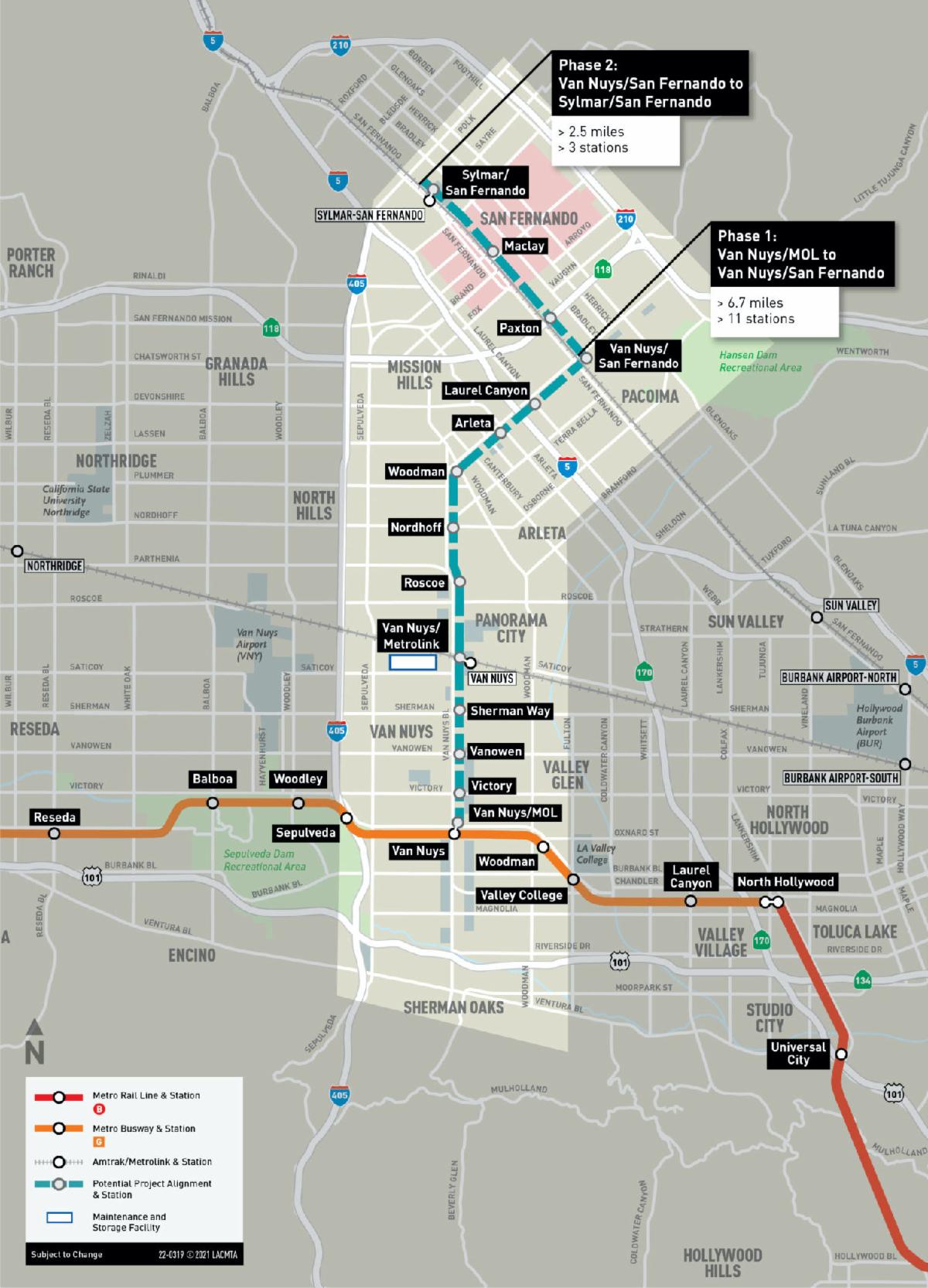 Metro will soon be reviewing design proposals for the Sepulveda Transit Corridor Project. These plans will offer combinations of subway, surface rail or elevated monorail to connect the Westside to the Valley. Today, this route is served primarily by the San Diego Freeway (Rte. 405), the busiest and most congested freeway in the United States. Metro will hold a public virtual meeting to discuss the proposals:

Metro is working in coordination with Caltrans to evaluate alternatives to convert the existing high occupancy (HOV)  lanes to dynamically-priced, high-occupancy toll (HOT) lanes, called ExpressLanes, in both directions of I-405 between I-10 and US-101. The following alternatives are being considered as part of the environmental review process which will study how each performs in accomplishing the project’s goals.

Video providing an overview of the alternatives

You may also explore the ‘Project Alternatives’ section of the interactive StoryMap.

Please submit your comments via any of the following methods by Friday, October 1, 2021. During this period, you are encouraged to submit your thoughts and comments on the alternatives, as well as help identify and inform the issues that may need to be addressed in the environmental process.

Join us to learn more about the Project’s Final Environmental Planning Phase.

We are hosting virtual meetings for you to join online or by phone:

Comments for the FEIS/FEIR will be accepted during the review period between October 2, 2020 and November 2, 2020 by email to eastsfvtransit@metro.net or by visiting www.metro.net/eastsfvtransit and completing the Comment Form under “Contact Us.”

Please reach out to us if you have any questions and concerns.

The Metro Bus Rapid Transit (BRT) was the main topic of interest at the Van Nuys Neighborhood Council meeting on Wednesday, October 14. The council heard a presentation by Bill Haller, who has taken a great interest in the BRT and made quite a number of presentations across the valley.

The BRT is currently being proposed by Metro to go from the North Hollywood Red Line station along either Laurel Canyon or Lankershim, west on Roscoe and then west along Nordhoff to the Chatsworth Orange Line station.

Haller’s presentation highlighted the benefits of the BRT including that it would address these Van Nuys issues:

VNNC Board Members asked a number of clarifying questions and heard stakeholder comments which supported both sides of the issue. Arguments in favor said that more transit was needed, that transit would improve Nordhoff property values and that students could more easily reach CSUN from Van Nuys. Arguments against said that more transit was not needed and is not being used now and that the transit line would not improve the wealth of the riders, nor would it rectify the wealth gap.

The Van Nuys Neighborhood Council voted to support the project moving to the next step which is to conduct and Environmental Impact Review on proposed routes. The Metro Board will hear the matter on Thursday, October 24, 10am at their upcoming meeting at One Gateway Plaza, Los Angeles, 90012. All interested stakeholders are invited to attend the meeting and make their voice heard. Metro Agenda: http://metro.legistar1.com/metro/meetings/2019/10/1586_A_Board_of_Directors_-_Regular_Board_Meeting_19-10-24_Agenda.pdf. See page 14, item 5.

Also of interest is the VNNC’s intention to represent you, the stakeholder, on City Council files which will impact Van Nuys. We voted to approve five board members to author and submit Community Impact Statements that we approve, so that City Council will know where we stand. Our approved authors include: President Sam Woolf, Treasurer Veronica Marin, Secretary John Hendry and board members Riguey Mercado and Kathy Schreiner.