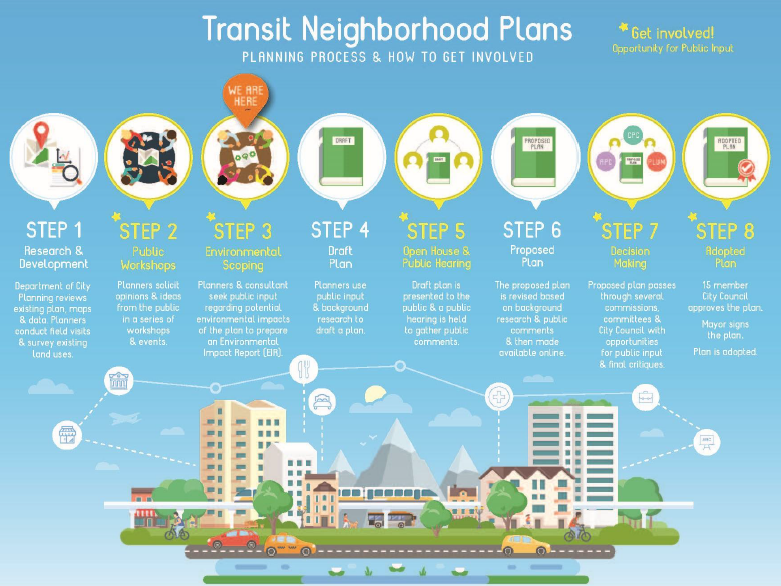 We are pleased to provide the July 25, 2018 Orange Line Transit Neighborhood Plans Presentation from the EIR Scoping Meeting.

In addition to the public comment methods listed below. You may download, print and complete this Comment Form and mail it in per the directions on it. 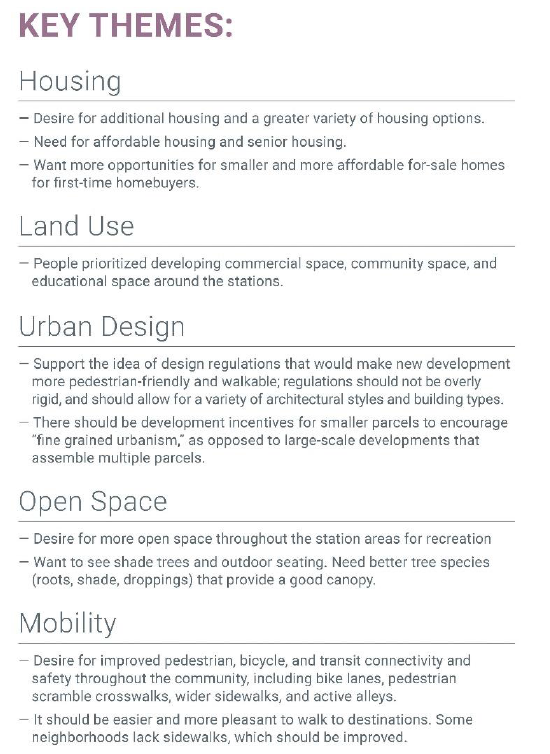 Comments can be submitted about:

Orange Line Transit Neighborhood Plans were the topic at the Van Nuys Neighborhood Council Planning and Land Use Meeting on Wednesday, July 18. City Planning brought a team to explain their current project and next steps. 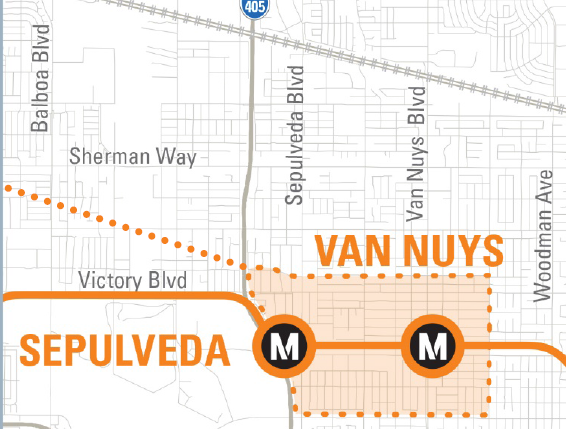 The Transit Neighborhood Plan development is an effort to identify new specific development guidelines for selected neighborhoods along transit corridors. In our case, the corridor is from Victory to Burbank and Sepulveda to Hazeltine, encompassing the Sepulveda and Van Nuys Orange Line Stations. In each corridor the objective is to revitalize neighborhoods, create an opportunity for more jobs and housing, foster a vibrant mix of land uses, increase mobility access, and improve public spaces. This is accomplished by specifying zoning through a program called re:code LA.

The Transit Neighborhood Plan sits within the framework of the General Plan, which for Van Nuys has not been updated in twenty plus years. Fortunately, the city has launched an effort to update all the General Plans and the Van Nuys General Plan update began this month. While the effort is none too soon for Van Nuys residents, it should be noted that the shortest expected timeframe for completion is three years.

The Orange Line Transit Neighborhood Plan effort began in 2016 with focus groups, presentations to Neighborhood Councils and public visioning workshops. A concept plan was shared in public workshops in November 2017. The plan is now in the Environmental Review phase. City Planning will conduct a public Scoping Meeting on Wednesday, July 25, 2018 at the Marvin Braude Constitutent Service Center, 6262 Van Nuys Blvd, 6pm. Everyone is invited to submit comments for consideration. About a year later there will be a public hearing where the draft Environmental Review report will be released. The project then works its way through the city’s Planning and Land Use Committee for approval by City Council.

City Planning reports that regarding current stations and the vibrancy of nearby services, “there is not a there there”. Community feedback to date calls for a plan to promote services near Orange Line stations, provide amenities near bike paths, provide open space, ensure adequate parking and safe street crossing, increase housing density and variety near stations, increase shade, safety and cleanliness and provide good wayfinding signage. 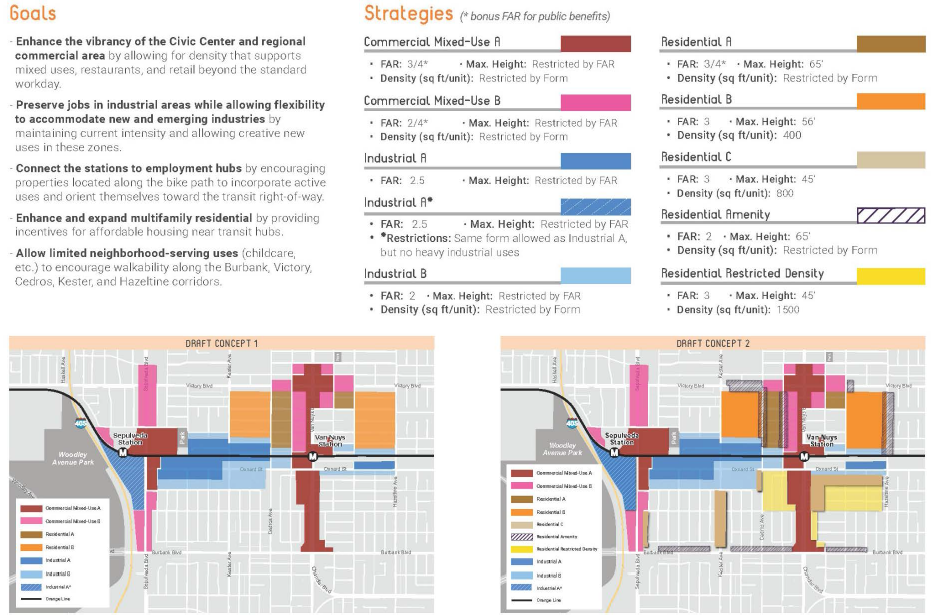 Strategies in the plan development process include:

The above chart shows how the plan has evolved from concept 1 to concept 2. For a better view of that chart please see the Presentation and Related Documents. To provide input to the plan, please attend the July 25 meeting and sign up for project updates.

Others were concerned about the need for adequate parking, noting that jurors park up the neighborhood around the court during the day, as they don’t want to pay parking. Committee Member Penelope Meyer added that the parking also needs to be safe, as her daily commute includes a scary walk past 27 tents in a homeless encampment to get to her car after leaving the Orange Line.

Find Us On Social